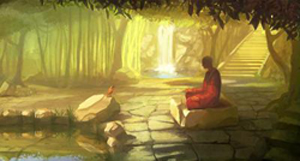 AMCs are five-day events, also called nitya samadhi, designed to take one into one’s own state of silence within, such that one blossoms into a state of joyousness and love, and one can effortlessly see godliness in others.

AMCs involve group silence or inclusive silence vis-à-vis the traditionally practised individual silence or exclusive silence. Any activity when done in a group has an exponentially higher effect compared to it being done individually on your own.

It involves retrieval from a state of constant stimuli acting upon us. Food is one such stimulus, which is partly retrieved for a while. Talking is another such stimulus which is cut off as well. The third such stimulus is goal-orientation.

Pujya Guruji defines the practice of silence as taking time not to be involved in producing any results. A person becomes fully charged for a few weeks following the course (by the end of which he should go ahead and do his next AMC). The silence generated during the AMC facilitates the settling of the mind and brings relief from mind–body or psychosomatic diseases like asthma, arthritis, diabetes etc.

Tremendous love develops within you towards each and every person you meet and you effortlessly see godliness in everyone.